Denmark with a camper van

With the camper to Denmark – our northern neighbor. Denmark is not too far away, especially for residents of northern Germany, and is also easy to reach from the south. The Kingdom of Denmark is located between the North Sea and the Baltic Sea and consists of, among other things, Jutland (with the only non-sea border, namely with Germany) and the other islands, such as Funen or Zealand with the capital Copenhagen. In fact, the northernmost part of Jutland is also an island, separated from the mainland by the Limfjord, which does not play a major role in the perception.

Denmark is the dream destination for families with children not only with a motorhome, there are so many opportunities to enjoy the vacation life there. We ourselves have already been there as children on summer vacation and have fallen in love again with the regions on the North Sea and Baltic Sea after a longer break. Denmark has a special charm – friendly, lovely, cozy. Simply hyggelig!

The climate in Denmark is temperate and very balanced and characterized by the coast. The North Sea has a balancing effect on the climate. The average annual temperature on the west coast is 16°C, with August being the warmest month, with a temperature of about 20°C. In August the water temperature is also about 20°C. Bathing in the sea is therefore quite possible, but of course not to be compared with the Adriatic Sea.

It also rains sometimes, but the nice thing about the lake climate is that the weather can be very changeable, so that rain is followed shortly by sunshine again. Winter temperatures are around freezing point or just above.

When is the best time? In answering this question, one must clearly differentiate according to the target group and one’s own preferences. Mid-June to the end of August can be considered the biggest tourist season. Here, many guests are on the beach and in the small towns with their stores, pubs and restaurants. Undoubtedly, this is the best time for a family vacation with children, because entertainment attractions and facilities at campsites also tend to be closed in the off-season.

If you are unattached, do not have to take into account school vacations and rather like to have fewer people around you on vacation, you will find very good opportunities for a vacation in a motorhome in the low season and even in winter in Denmark. However, it must be clear that you have to actively search for open campsites to stay overnight, because a wild overnight stay is not allowed in Denmark.

Our most popular time is spring and late summer/autumn. Then there are also days that you would rather spend in the camper. But for us, that is also Denmark.

The way to Denmark by motorhome

No matter from which region of Germany you arrive, at some point all travelers to Denmark meet the A7, the north-south highway, which ends at Flensburg at the Danish border and becomes the E45. Those who want to go north continue on the E45, while vacationers traveling to the North Sea coast in the west change to the highway toward Esbjerg at Kolding at the latest, or leave the highway even earlier and take the country road across to the west. Islanders who want to visit Odense or even Copenhagen can also turn east at Kolding and drive across the impressive Storebaelt Bridge over the Great Belt into the eastern part of Denmark. However, this is subject to tolls and costs for motorhomes staggered according to length and permissible weight.

Ferry route from Puttgarden on Fehmarn

For travelers to the eastern part of Denmark, there is also an alternative route. Via Lübeck further to Fehmarn, the ferry from Puttgarden to Rødby in Denmark.

If one, as we also often do, was previously in North Frisia (eg Sankt-Peter-Ording, Husum) on the road, has another very charming option of arrival. If you follow the Bundesstraße 5 north from Husum, you will also meet the Danish border at Süderlügum after Niebüll (not far to the Sylt train) and can then continue towards Ribe. Due to the speed limits in Denmark also not a big disadvantage compared to the highway route further east. We prefer this direction, you see there more rural Denmark than the not so attractive area next to the highway. For travelers with the destination island of Rømø, this route is mandatory anyway, for all others, the beautiful cities of Tønder and Ribe are waiting along the way.

Car beaches on the islands of southern Denmark

Fjord and National Park Thy

Where North and Baltic Sea meet

For some motorhome drivers a real decision, but for some not. The fact is, both sides of the coast have a different character. While the North Sea is rough and wild, the Baltic beaches are more lovely and the sea is calmer. Also, the tides are much less visible on the Baltic Sea than on the North Sea. In the south of Jutland, up to about Skallingen, the Wadden Sea also continues. A true natural wonder, which is under special protection. Where one likes it better, you have to try out. Personally, I remember that our visits to the Baltic Sea were always nice, but afterwards we had to go over to the North Sea again to experience the Denmark we love.

Not to find a campsite in Denmark in the not too far distance is almost impossible. Places for motorhomes are plentiful and well signposted, especially in the tourist regions of the west coast on the North Sea. There are some directories and camping guides, but we are always happy to drift and look for us in advance on Google Maps a beautifully located place out, which we then head.

As already written, you should also ask outside the peak season or research whether the place is still open. In the vacation season, places can also be well filled or full, which has not happened to us yet.

Some campsites also have extensive attractions and play areas for children, so that even a day at the place is not boring.

A special feature in Denmark are the Quick Stops. This cheaper offer is aimed at transients who arrive late at the campsite and leave soon in the morning. During this time, however, water can be refueled or gray water disposed of. A further development of this concept are the DK pitches, which is relatively new. Here one should be able to check in and out flexibly. An information brochure is available at Camp-DK.

Motorhome vacation with children in Denmark

Denmark is perfectly suitable for family vacation with children, whether with caravan or camper. Miles of sandy beaches framed by dunes, child-friendly campsites and numerous attractions that you can drive to as a day trip. For example, there is the world-famous Legoland® in Billund.

A small selection of 11 attractions for children can be found at visitdenmark.

On the occasion of the 50th birthday of Queen Margaret II, this “longest sight in Denmark” was initiated. Through the entire country leads this 3500 kilometer long road, which is signposted by brown signs with a daisy flower in very many places.

There are wonderful supermarkets in Denmark that should make any vacationer happy. Prices for some products are on a slightly higher level than in our country. For example, in our experience meat is more expensive. But for some regional products you are happy to pay more: fresh fish, for example.

Parking on the beach

Where is one closer to the North Sea than on the beach? And that with his motorhome. In some places you can actually drive directly onto the beach. This is possible on the island of Fanø and Rømø, for example, or in Løkken, further north. Open the window, the sea wind blows through the car. You can also see caravans again and again. However, it is not allowed to spend the night there. Despite the sand being flattened in many places, caution is still advised! All too quickly you get stuck and can only get free again with outside (and possibly expensive) help.

Denmark has compatible power outlets with 230V AC. On campsites you will find in most cases the blue CEE sockets that we are used to in Germany. How strong the individual connections are fused depends, of course, on the campsite. The use of high-wattage devices such as hair dryers or coffee machines should be done with caution, as everywhere.

As soon as you cross the border into Denmark, the traffic calms down considerably. Because of the general speed limit, even on highways, there is no such speeding in Denmark as in Germany. Deceleration is the order of the day. If for some reason you have missed to see the border signs, you will notice the crossing of the border to the south, when suddenly again the cars on the fast lane thunder past you.

The limits for motorhomes depending on the gross vehicle weight can be found here.

Although Denmark is a member state of the EU, it does not have the euro as a means of payment, but the Danish krone (DKK). On vacation, therefore, conversion is announced. At the moment (June 2020) the exchange rate is 1 € ~ 7,45 DKK. So you can roughly divide by 7 if you like to get a feel for the prices.

Very often, the ATM is the cheaper alternative to get Danish kroner. There are many ATMs, very often you can pay with your EC card, e.g. in the supermarket. In addition, it certainly does not hurt to have a credit card with you. 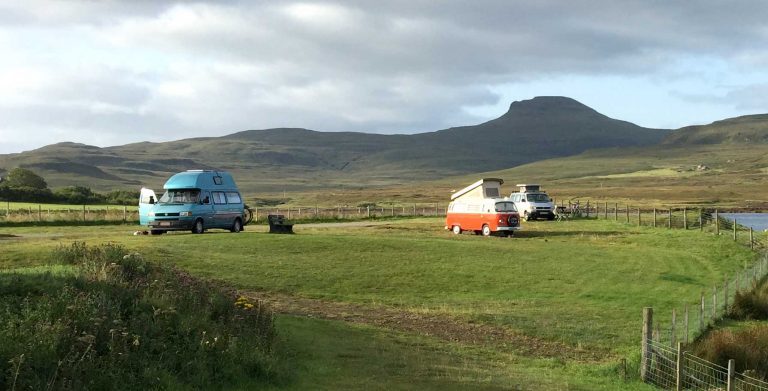 Scotland with a camper van Camper Packing List – What must be included as initial equipment when camping?